Following the publication of our Warehouse Automation – 2022 report, we’ve produced this insight to discuss the major themes which have influenced the forecast. The report provides an extremely granular assessment of the market and factors in a lot of nuance. This insight therefore intends to provide a top-level summary of the key trends. 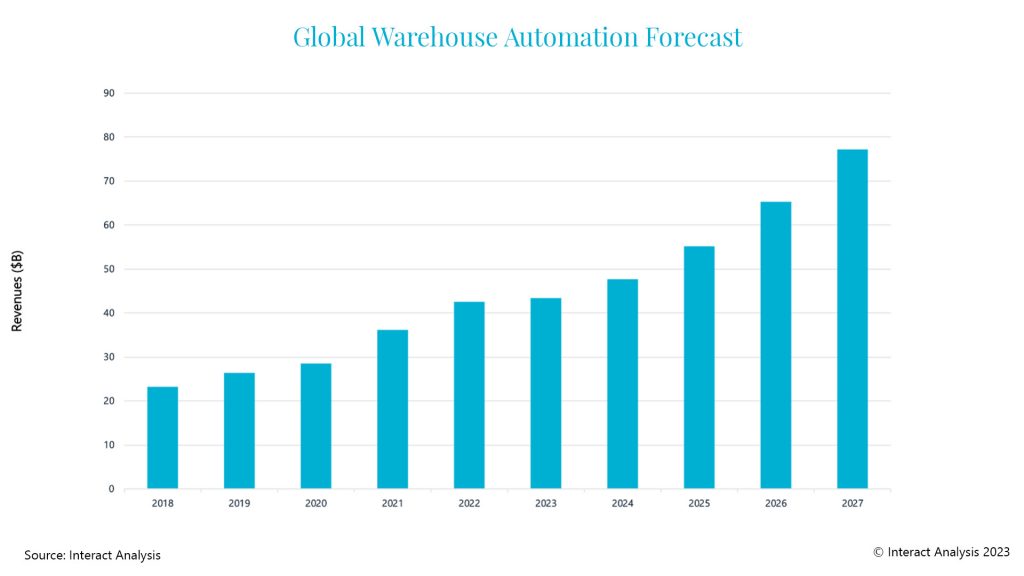 The warehouse automation market grew by a phenomenal 27% in 2021, with revenues reaching $36 billion, up from $28.5 billion in 2020. The growth of automation revenues in 2021 was driven mainly by the e-commerce spike caused by the pandemic. According to FRED, US E-commerce penetration peaked at 16.4% in 2020, rising from 10% in Q1 2019. To service this increase in e-commerce demand, we saw several retailers bolstering out their fulfillment capacity. For example, Amazon’s total warehouse square footage ballooned from 272 million at the end of 2019 to 525 million at the end of 2021, according to its annual reports.

The pandemic also had a significant impact on commodity prices which skyrocketed in 2020. Steel prices, for example, had more than tripled by the end of 2021 compared to pre-pandemic levels, while the cost of electronic components also increased significantly due to supply-chain constraints and poor demand forecasting. The cost of steel can make up to 80% of the value of some automated systems like unit-load AS/RS which meant that the cost of automation increased significantly during the pandemic.

Since its peak of 16.4%, US e-commerce penetration dropped slightly in 2021. This was largely due to a shift back to brick-and-mortar retail which is going through somewhat of a renaissance. This caught many retailers off-guard as they expected the pandemic would permanently change buying habits. In response to the slowdown in e-commerce sales, many e-commerce retailers announced a pullback in their fulfillment network expansions.

For example, Amazon announced it would be slowing down its fulfillment expansion after posting a loss in Q1 2022. This will have a significant impact on its investments in warehouse automation which we expect will be cut by 30% in 2022 with a further 15% reduction in 2023. Ocado also announced it would be reducing its expansion plans as it ponders how it will fully utilize its new facilities in Bicester and Luton in England.

Given that Amazon accounted for more than 30% of total US warehouse automation investments in 2021, this will have a significant impact on the overall warehouse automation market. Furthermore, the automation vendors most exposed to Amazon will likely now be looking elsewhere for projects which may erode margins as competition heats up. 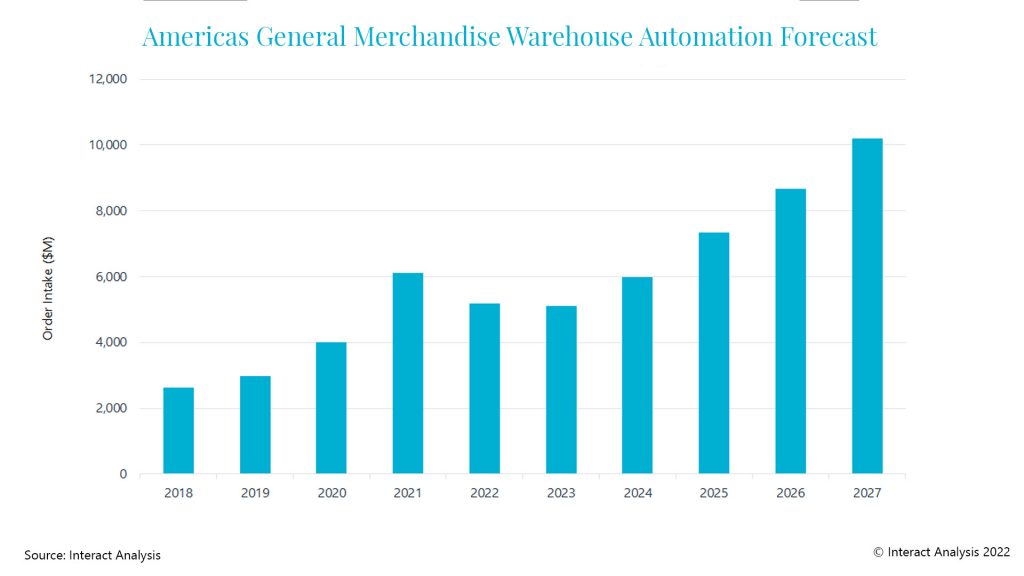 In addition to the slowdown in e-commerce sales growth, there’s also been several other geopolitical and economic factors that have affected the market. For example, the Russia-Ukraine war has led to a rise in economic uncertainty in Europe. Coupled with soaring energy prices, some retailers and manufacturers are postponing large capital investments according to our research interviews.

Long-term, however, we expect a return to steady growth. Between 2024 and 2027, we forecast revenues to grow at a CAGR of 17%, driven by improving macro-economic conditions. From 2024 onwards, we expect e-commerce growth will pick up as the geopolitical and economic environment strengthens. Furthermore, as economic conditions improve, we expect a renewed focus on shorter delivery windows from consumers which hasn’t been a top priority in recent months due to the cost of living crisis in many countries.

Our latest Warehouse Building Stock Database shows that just 18% of warehouses have some form of physical automation in them, which is expected to grow to 26% by 2027. With such a large opportunity, short-term challenges shouldn’t take away from the long-term growth potential this market faces.

For more information on the Warehouse Automation report, view our brochure here.