Who Are the Leading Warehouse Automation System Integrators?

Dematic and Honeywell Intelligrated have been particularly successful within the general merchandise sector in recent years, with both companies winning large projects with e-commerce retailers. In 2018, Dematic and Intelligrated ranked #1 and #2 globally for general merchandise warehouse automation, respectively, in terms of revenue. In 2018, Dematic’s order intake grew 15.5% while we estimate that Intelligrated’s revenues rose by more than 50% during the same period.

KION and Honeywell’s acquisitions form part of a wider trend of large industrial players entering the high-growth warehouse automation market and also consolidation occurring within the supplier base. In addition to the moves made by Honeywell and KION, Toyota Industries acquired Bastian Solutions and Vanderlande in 2017 and now holds the fifth largest share of the global warehouse automation market when combined. Similarly, Swisslog, ranked 10th globally, was acquired by the robotics company KUKA in 2014.

With the global warehouse automation market forecast to grow at a CAGR of 12.6% through to 2023, with strong underlying drivers of demand, it’s easy to see why industrial companies have been striving to gain a foothold in the market. Warehouse automation in many ways complements their businesses. For example, Intelligrated now offers Honeywell’s Connected Assets predictive analytics platform within its conveyor systems. KION and Toyota Industries have been able to leverage their European and US sales and service networks and at the same time can sell complementary products such as fork trucks. 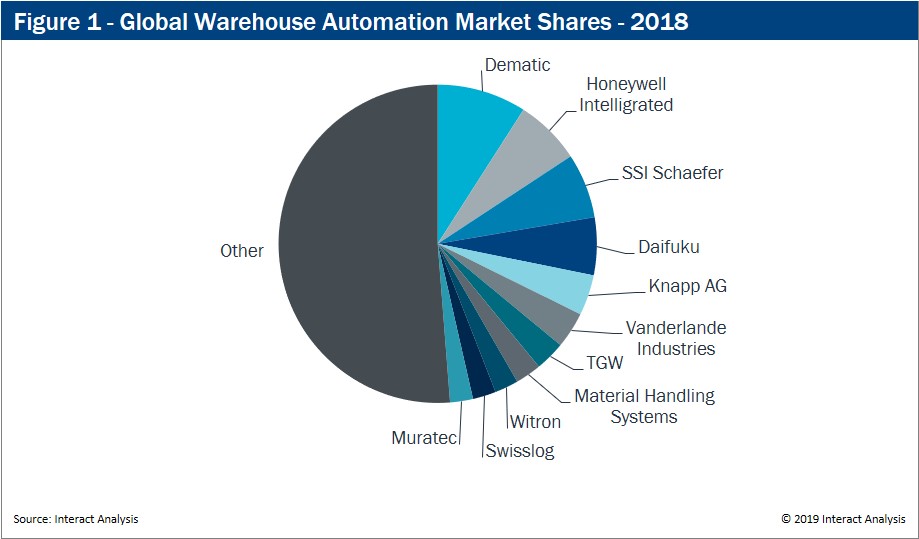 It’s not just industrial companies which are trying to get a piece of the action. In recent years, the private equity firm Thomas H. Lee Partners has been on an acquisition spree acquiring Material Handling Systems, along with VanRiet, OCM and a myriad of smaller engineering firms creating the largest warehouse automation system integrator for the parcel sector ahead of second and third ranked Fives Group and Vanderlande. Its latest acquisition of AutoStore in June only strengthens its warehouse automation arsenal.

While Dematic leads the global warehouse market, an estimated two-thirds of its business is in the Americas. SSI Schaefer on the other hand, is the European market leader with revenues in the region nearly 50% greater than its closest competitor, Knapp. However, a handful of European system integrators are closing in on the gap.

Whilst EMEA and the Americas have a relatively consolidated warehouse automation supply base with the top four system integrators accounting for 41% and 52% of the regional markets respectively, APAC tells a different story.

Although more than double the size of its closest Asian competitor, Daifuku is the market leader in APAC, yet it accounts for just 10% of the market. In fact, the top four system integrators in APAC account for just 19% of the regional market. This is primarily due to a very long tail of system integrators in China, many of which have only installed two to three projects. China’s warehouse automation market is made up of three distinct parties.

Despite a slowing global economy, the warehouse automation market remains fairly resilient to the macro conditions due to the underlying structural drivers; the phenomenal rise in e-commerce – especially within APAC, the consumer demand for ever shorter delivery times and the on-going labor shortages. Many warehouse automation vendors saw a strong rebound in order intake in Q3, reversing the first half of the year’s poor performance. As industrial companies prepare for a global economic slowdown, warehouse automation will be a key business unit for revenue growth.

For more information on our Warehouse Automation research please visit our report page here, or contact us.