What Does The Future Hold For Micro-Fulfillment Centers?

As consumers shift towards online shopping, retailers have been tasked with the audacious task of fulfilling orders in a profitable manner whilst simultaneously reducing the delivery time. To this end, we’ve seen the proliferation of automated micro-fulfillment center (MFC) solutions which combine the efficiency of automated centralized warehouses with the flexibility and speed of in-store picking as well as the close proximity to the consumer.

We recently compared the use of centralized vs micro-fulfillment centers and the key variables which influence the decision. Given the recent news that Ahold Delhaize has partnered with Swisslog and AutoStore to develop a stand-alone MFC, we thought we would explore the question of how MFC formats will change over time.

What are the main MFC formats?

The most difficult part of the studying the MFC industry is defining what it actually means; MFCs mean something different to everyone. We define an MFC as a goods-to-person (G2P) picking systems which is less than 3,000m2 (~32,000sq ft). Within this definition, however, exist several formats:

The graph below shows the expected distribution of MFC projects globally throughout the forecast period between 2020 and 2025. 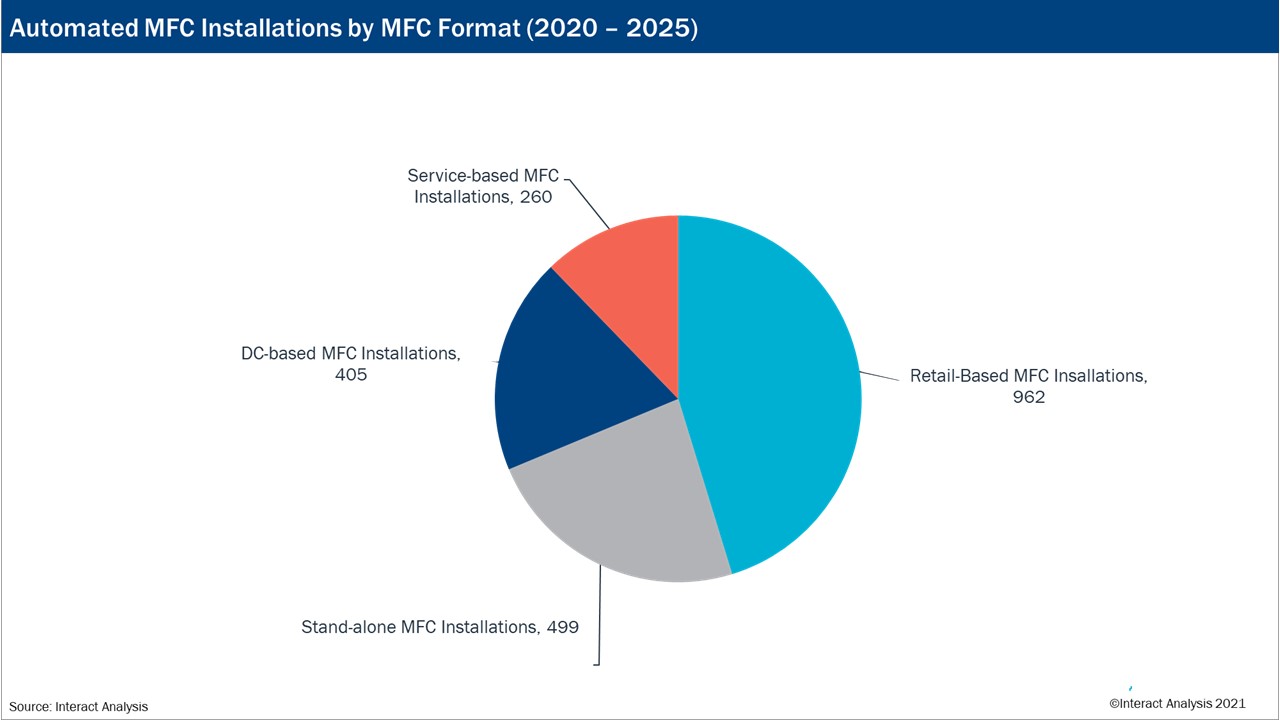 Which Verticals will Adopt Which MFC Formats?

There are two main reasons for this. Firstly, grocery chains inherently have many real estate assets and they will try to make use of their existing under-utilized assets before investing heavily in dark-store MFCs. Secondly, most grocers use a manual in-store picking approach to fulfilling on-line orders. Therefore, the transition from a manual in-store picking model to a retail-based MFC tends to be easier than transitioning to a centralized model which would require a re-networking of the entire supply chain. It is unsurprising that The Giant Company and Ahold Delhaize invested in a stand-alone MFC facility since it already operates 28 manual e-commerce fulfillment centers (EFCs) along with 1,100 pick-up locations.

General merchandise and apparel retailers, on the other hand, tend to have a smaller real estate footprint and often don’t have the back-of-store space to install an MFC solution. As a result, we expect dark-stores and DC-based MFCs to account for a larger share of MFC installations within these verticals. Exotec and Attabotics have already installed a large number of stand-alone and DC-based MFCs for general merchandise and apparel retailers with many more in the pipeline.

You’ll notice in the pie chart that we have a fourth category called ‘Service-based MFCs’. This segment corresponds to MFCs which are built and owned by the automation vendor and offered to customers on an OpEx basis. A good example of this is Fabric which offers what it calls ‘As-A-Service’. This approach will be best suited for SME’s which may not have their own fulfillment capacities as well as larger retailers which want to outsource some of their marginal fulfillment capacity during the holiday periods.

Based on our research discussions with MFC vendors and retailers alike, we’re forecasting 110 MFC projects to go live in 2021. As Ahold Delhaize reiterated in its recent press release, it will continue testing and trialing different MFC approaches including its on-going and successful projects with Takeoff Technologies.

Ahold Delhaize isn’t alone when it comes to trialing different technologies; Walmart announced just last month that it would be using MFC solutions from Fabric and Dematic in addition to its on-going trials with Alert Innovations.

What is for certain is that customers are shopping online more than ever before, and retailers are desperately trying to build up the fulfillment capacity required to meet the demand. Micro-fulfillment centers are becoming critical assets in the pursuit of increasing fulfillment efficiency and flexibility.