Where are all the security drones?

Are drones a new growth opportunity for the security industry or are there too many barriers to entry?

In the early 2000s the security industry had a renaissance. The ‘war on terror’, a massive technology switch from analogue to network, huge cost reductions, huge technology advances and a massive public surveillance push by China all contributed to rapid growth.

In recent years, growth has slowed substantially. Falling demand, severe price pressure and competitive domination by Chinese firms has made the industry a tough place to operate.

In a recent research report, we examined the commercial unmanned aerial vehicle (UAV) market in depth. The market is growing rapidly, driven by loosening regulation, improvements in technology and several core applications such as inspection and construction. It doesn’t take much imagination to see the benefits to building inspection and site situational awareness that UAVs might bring. Is this a new growth opportunity for security manufacturers and operators?

Perhaps, worryingly, our discussions with companies active in the UAV industry didn’t reveal any particular focus on physical security. Applications such as building inspection and construction are far more important to the nascent industry right now.

If you focus on the physical security industry the signs, at first, don’t look much better:

However, it isn’t all bad news. The largest manufacturer of video surveillance equipment – Hikvision – showcased its own drone earlier this year. Furthermore, there are several companies who are starting to offer more security focused drone services – Nightingale Security, Airobotics, Aerovinci, Elistair, Cardinal Security, Aviatdrones, to name but a few.

The important question is: why is now the right time for the growth of security UAV applications?

There are two main opportunities – one for security equipment and service providers, and one for system integrators and installers.

For security equipment and service providers, there is a new growth opportunity here. As shown by the following graphic, there is a move toward drones-as-a-service. For enterprise customers, they don’t want to own or fly their own drones, they simply want the intelligence from them. This is a good fit for security service providers who are likely already providing managed services to many of the organisations who are interested in using UAVs. 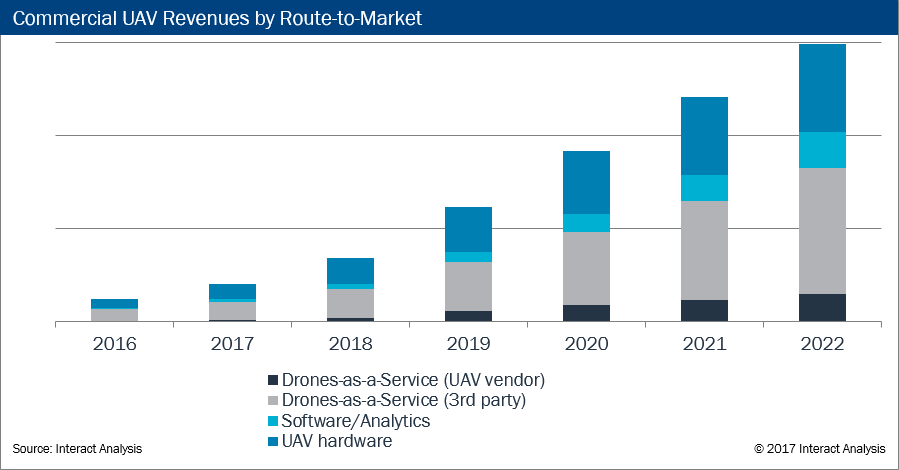 Where are all the security drones?

Specifically, the following applications are likely to be a good fit for UAVs:

We believe that UAVs represent an opportunity for companies in the security space, particularly as traction in other applications occurs. Additionally, system integrators and installers should explore how they can use UAVs in their workflows to improve efficiency and safety.