Demand for palletizers in North America has surged in recent years. We estimate that market revenues grew by 12.3% in 2018 to reach nearly $340 million. This growth is largely fueled by both the increased cost of labor and availability of labor. Manual palletizing is strenuous and demanding work which results in a high turnover of staff that is costly to manufacturers. Compounding this trend are the increasing labor rates across the US. According to the Federal Reserve and the US Department of Labor, the average state minimum wage has been outpacing inflation since 2013; signaling an increased burden faced by employers.

Palletizers are a compelling solution to this problem. Automating palletizing not only reduces labor expense, it also increases the throughput of a line in most cases and offers other benefits like pallet standardization. Previously a neglected area in terms of automation, palletizers are now being viewed as low hanging fruit by manufacturers as they seek to extend the benefits of automation to untapped areas of their facilities. This newly found surge of adoption has pushed demand for palletizers well above the growth rate of the broader machinery market (See figure 1). 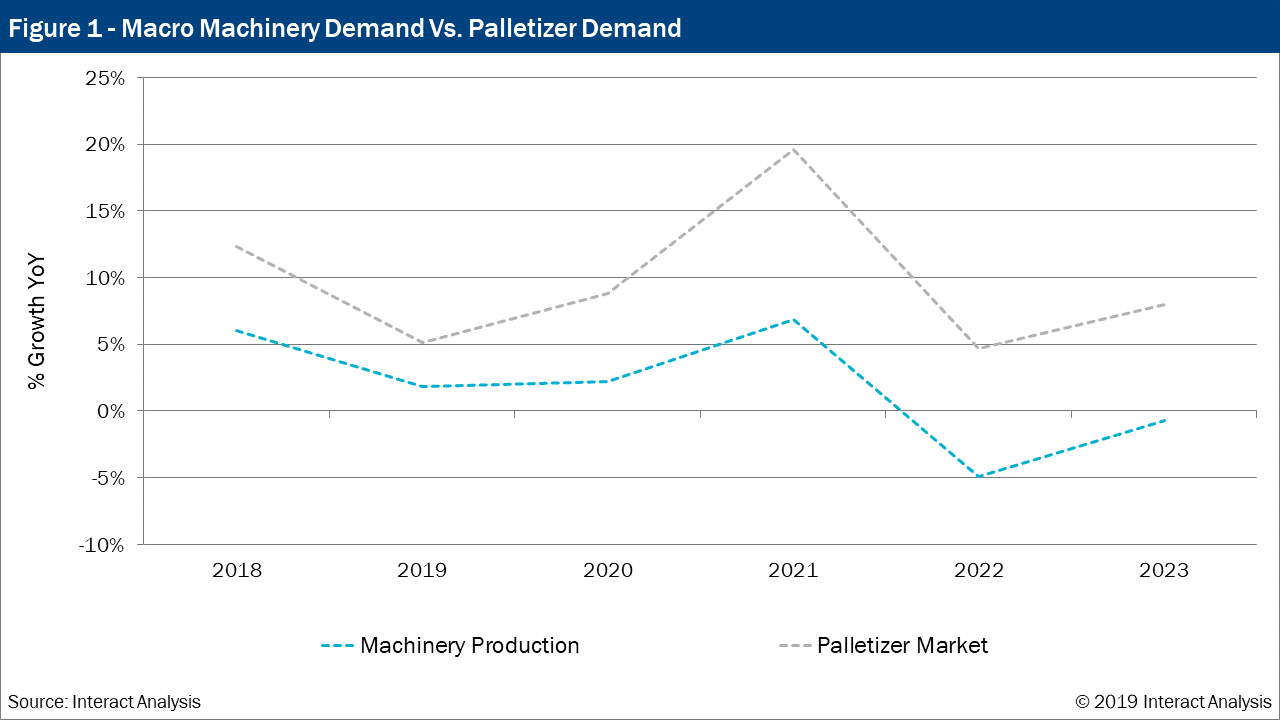 While all types of palletizer are in high demand, one type is seeing far higher demand than the others.

The America’s machinery sector’s output was a little less than half of that in EMEA in 2018. The large difference in size between the two regions have drastically shaped their attitudes towards handling palletizing robotically versus with a machine (e.g. conventional or gantry). The size and prevalence of machine builders in Europe has led to an attitude of ‘why use a robot for something that could be handled by a machine?’. This thinking is why conventional palletizers are much more prevalent in the European market than they are in the North American market.

The lower availability of machine builders in North America versus Europe has led to a different attitude toward robotics and more importantly, allowed robotic arm suppliers to become an entrenched alternative to large machinery in certain applications. Robotic arm suppliers like Fanuc, have successfully developed large integrator networks across the region. It has become easier for integrators to develop palletizer solutions by partnering with a robot OEM rather than developing their own conventional palletizer products. This is why at this year’s PackExpo in Las Vegas, robotic palletizers on display outnumbered conventional and gantry displays ~3 to 1.

This is not to say that demand for other types of palletizers is lacking in North America. Both conventional and gantry are growing steadily, with conventional showing more growth than gantry. The figure below shows the forecast growth of each product type in the next five years: 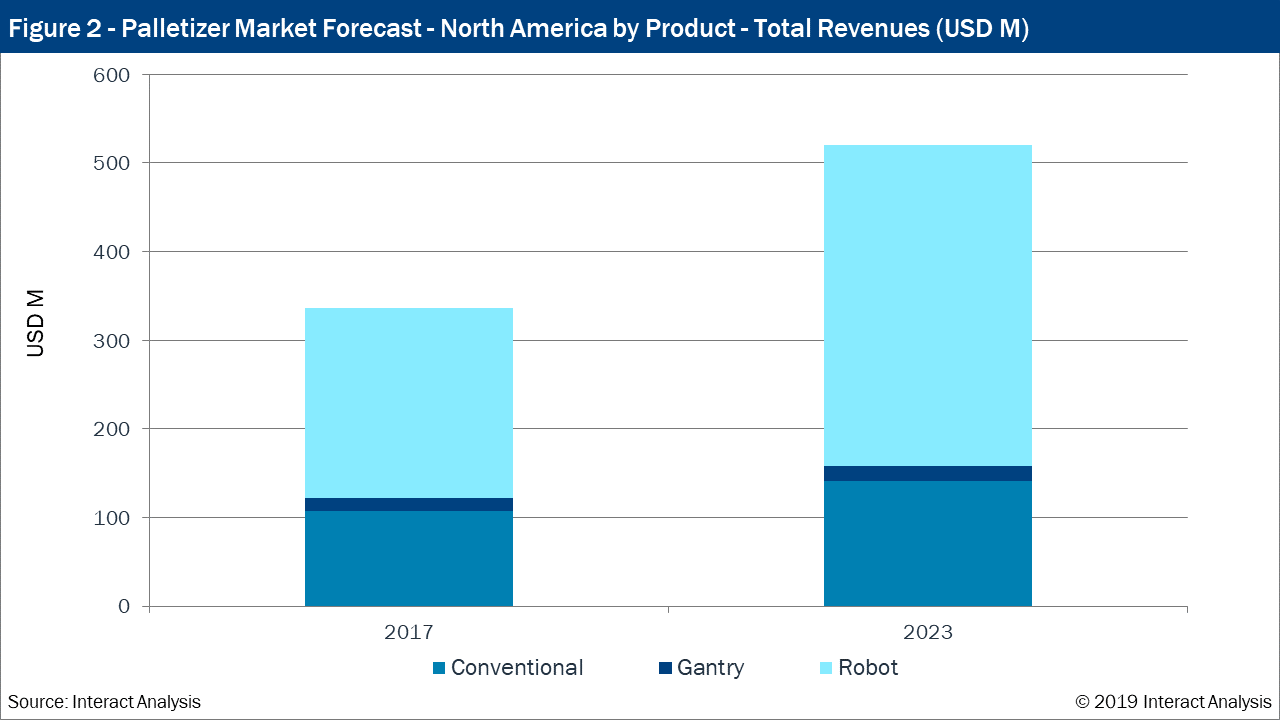 We predict the market for palletizers will continue to grow as more new customers adopt the technology. This will drive growth rates up for every product type across our forecast with robotic experiencing the highest gains year over year. The palletizer market in North America is showing all the indications of having a bright future ahead of it. We expect the market to grow strongly through 2023.

The data presented in here is sourced from a study conducted by Interact Analysis on the North American Market for Palletizers. The insight is available for purchase and includes analysis by product, country, and industry. It includes market shares analysis for palletizer supplier’s in North America, as well as analysis on the size and growth of end industries of palletizers. The research was conducted through interviews with suppliers and stakeholders over a 4-month period.

For more information please contact the lead analyst of the report blake.griffin@interactanalysis.com.