Warehouse automation has had a good pandemic. That’s because it’s being driven by two covid-related trends: a seemingly permanent spike in e-commerce, and an ongoing labor shortage that has led to ballooning labor costs.

To take the second point first, the labor problems during the height of the pandemic were very much a short-term thing caused by widespread staff absences due to self-isolation, as well as the need to implement safe social distancing practices in warehouses.

Yet the consensus is that the labor shortage is here to stay. In the specific case of warehouse work, a structural shift away from manual labor is a large part of the problem – as is the general issue of aging workforces in most major economies. This shift away from warehouse work has resulted in strong wage inflation in the sector, driven primarily by Amazon which has increased hourly rates to well above previous market norms, forcing most e-commerce companies to follow suit. And for e-commerce operations, the difficulties are further exacerbated by sky-rocketing demand as customers who switched to (or increased their use of) e-commerce out of necessity during the pandemic are mostly not switching back to more traditional forms of shopping.

Luckily for the e-commerce industry, warehouse automation is well suited to handle the high levels of flexibility required for e-commerce operations. Yes warehouse automation allows e-commerce companies to redeploy scarce labor into higher value tasks in the short term. But, equally important, it offers much improved efficiency over the older more manual ways of doing things. The vast majority of warehouse operations that adopted automation as a short-term means of coping with the pandemic have seen the benefits. They will not be going back to the old ways.

A regional view is crucial 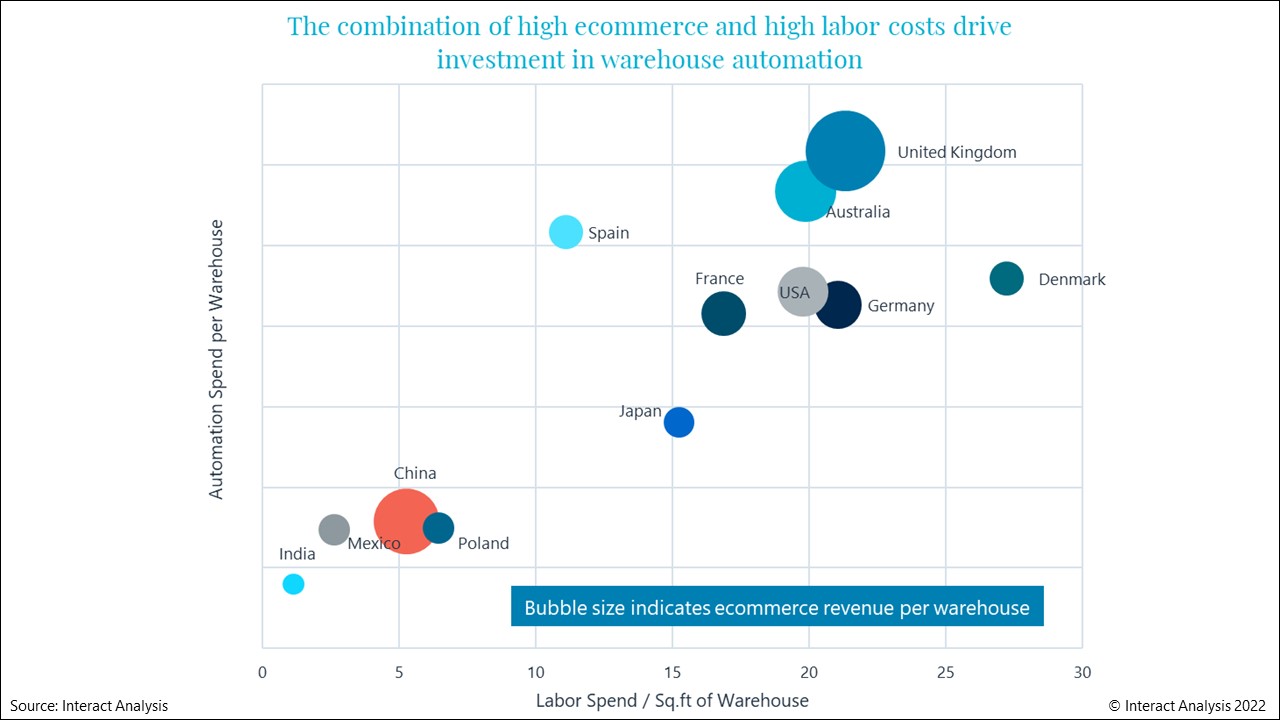 Why does the UK lead?

The most notable result from our research is that the UK is highly ranked. That’s because the country has a relatively high penetration of e-commerce, coupled with relatively high labor costs (on a per warehouse basis, the UK spends much more than the global average). This makes it a prime market for warehouse automation. UK consumers have been buying things online for a long time and expect extremely fast (and free) delivery – something that requires levels of efficiency that can only be achieved with automation.

Quite why the UK has been faster to adopt e-commerce than other comparable European nations is another question entirely. But the figures are stark: in France, the e-commerce spend per warehouse was $20.2m last year, in Italy it was $8.8m, while the UK has the world’s highest at $36m. The same is likely also true for the USA, where average automation spend per warehouse is also extremely high. The USA had an exceptional number of large warehouse automation projects announced in 2020, including from Walmart, Kroger, and, of course, Amazon. Part of the answer also undoubtedly lies in the fact that warehouse labor in the UK and these other countries is particularly expensive.

Meanwhile, in Denmark it seems very clear that the high automation spend is driven less by high levels of e-commerce spend per warehouse (which is only $15.3m) and more by their very high spend on warehouse labor costs which average at $27.2 per square foot of warehouse – the highest in the world by quite some margin (the next being the UK at $21.3). One notably large warehouse automation project in Denmark was commissioned by Reitan Distribution in 2020. It’s a 30,000 square foot warehouse extension with high pallet bay storage that will pick, pack and distribute 130,000 cases per day. 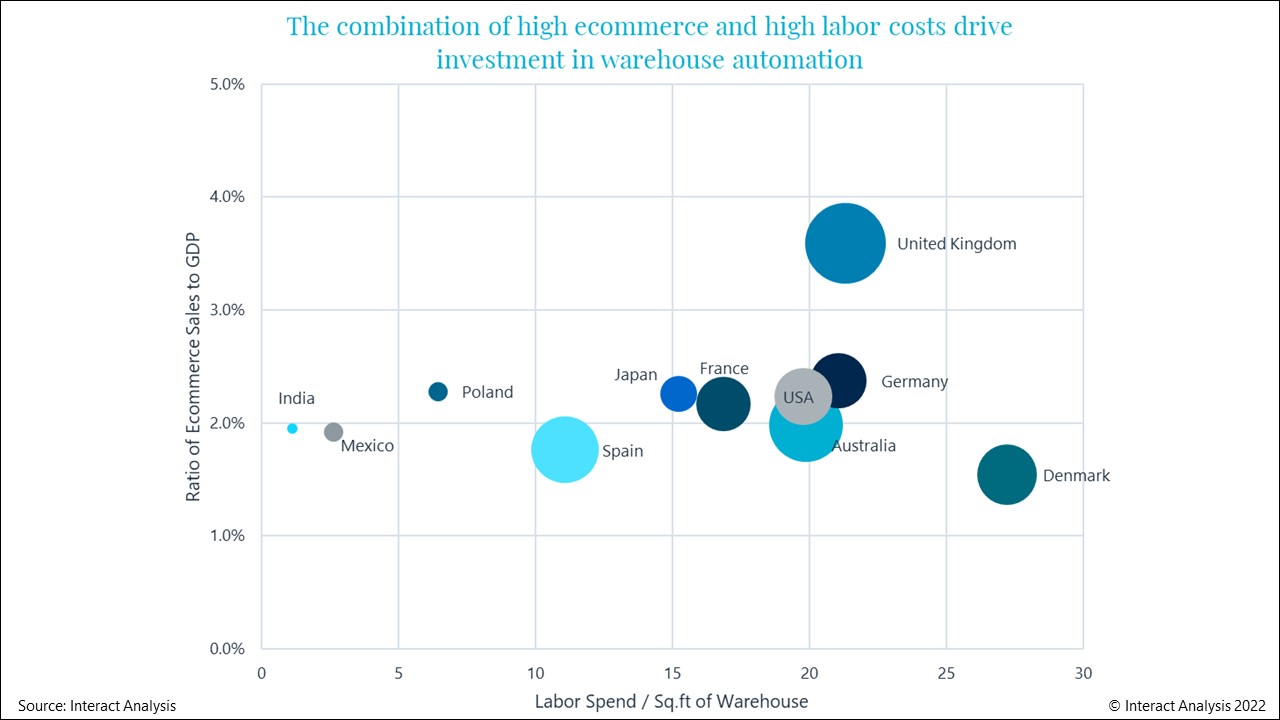 The Spanish exception that proves the rule

The outlier on these measures is Spain which has relatively low e-commerce spend per warehouse at €13.25m and very low average labor spend per square foot at €9.37. So, what’s going on in Spain? It all comes down to a massive investment by one company: Mercadona. Mercadona has been one of Spain’s largest investors in warehouse automation in the grocery segment. In fact, its investments in warehouse automation account for about 1/3 of the entire Spanish market. But this investment spike happened between 2018 and 2020 and therefore represents a short-term blip. In this regard, Mercadona is ‘the exception that proves the rule’: remove it from the equation and Spain’s position in the warehouse automation league tables would fall much lower – in line with its lower average e-commerce and labor spend figures.

UK to be Europe’s largest warehouse automation market by 2025

Finally, when it comes to the overall size of the warehouse automation market, Germany and the UK led Europe in 2020, while the USA was the world’s largest market at $8.1bn. From a CAGR perspective, looking out from 2020-2025, the UK is again in the lead at 24%, and it will by 2025 be Europe’s largest warehouse automation market at $3.9bn – by which point its market will be $0.9bn larger than Germany’s.

To learn more about trends in warehouse automation, get in touch with our managing director Ash Sharma today: Ash.Sharma@InteractAnalysis.com