Will commercial drones consumerize and commoditize?

The use of UAVs (drones) in commercial applications really began with the media sector and the implementation of ‘prosumer’ (professional-consumer) type UAVs that were easy to fly by any photographer. Now the number of use cases for drones in commercial applications is ballooning. From supporting police and fire service, to agricultural and construction surveying and bridge inspection. Whilst it’s very clear that this nascent industry is poised for substantial growth, what is less clear to some is whether prosumer UAVs will continue to be the product of choice or whether customers will adopt an industrial-grade solution.

There’s really two schools of thought when answering the above question. Some believe that we will see total consumerization of the commercial UAV industry, with customers adopting the user-friendly, easy-to-operate and intuitive, prosumer drone on mass-scale, just as the iPhone now dominates the workplace cell phone. The other line of thinking is that enterprises will really need to employ an industrial-grade UAV; more specifically designed for the task in hand, with better safety features, the ability to operate in harsher conditions with high reliability and more advanced payloads.

Due to the immaturity of the commercial UAV market and very short historical usage in many applications, there is a clear divide and lack of consistency into which approach is currently used. Take police & fire as an example. Several major police forces in the UK have been gradually rolling out the use of UAVs for assisting with crime scene surveying, monitoring suspects and road traffic accidents. Despite the high-level of data sharing amongst police forces, and even the existence of a national working group for UAVs run by its National Police Chief’s Council, there are massive differences in the type and price points of the actual drones being used. Whilst the Sussex & Surrey police are using five Aeryon SkyRangers at a cost of £64,000 each, the Devon & Cornwall police force opted to use DJI Inspire 1 drones which cost just £2,000 each. Such a huge variation in pricing of the same tool to be used in the same application is extremely rare in most industries. 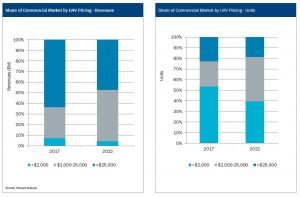 Will commercial drones consumerize and commoditize?

In future which way will the industry trend? Towards a consumerized and potentially commoditized UAV solution, or towards an industrial-grade and costly drone? Based on our research and as revealed in our new market report, The Commercial UAV Market – 2017, we are clearly predicting the latter to occur over time. To fully integrate into the commercial sector, UAVs will need to be highly redundant, safe and at almost zero risk of failure. Aside from meeting any stringent regulations in place for the country of use, enterprises will, as usual, want to de-risk the implementation of UAVs as much as possible. Of course, many commercial users may start off their first dabbling into using drones with a prosumer unit, but as the industry matures and education levels improve, we predict a shift in take up and these entry-level products replaced by higher-grade and more expensive units.

One key point to remember, is that in the longer-term, enterprises are unlikely to be purchasing and operating UAVs themselves, but instead relying on incumbent third-party service providers who will use drones as just another tool in their offering. This means the end-customer doesn’t need to know how to operate and fly a drone, and hence the need for an easy-to-use prosumer device is not really required for many commercial applications. Essentially the UAV will become just like any other piece of hardware in enterprise applications, and instead the real value lies in the data and solution that this data provides. Potentially, this counters the earlier argument that higher-value hardware will be preferred, but in order to get good-quality data with little to no risk, customers will likely need more than a prosumer drone.

If you’d like more information about this new market study, The Commercial UAV Market – 2017, please contact us at info@interactanalysis.com