Ocado’s share price has slumped more than 49% since January 2021, perhaps due to a market correction given the company’s incredibly high valuation at its height. Another factor could be its slow progress in adding partners. The company has formed just one new partnership since 2019 (Alcampo), whereas it formed eight partnerships between 2017 and 2019 (Ocado started licensing its technology to international partners in 2017). Some believe the slowdown in new partnerships comes down to a) Ocado’s premium costs relative to other providers, and b) a reliance of centralized fulfillment in an age of convenience and speed (i.e. micro-fulfillment).

This week, Ocado announced a myriad of new technologies and innovations primarily focused at getting customer orders delivered quicker. Whilst Tim Steiner may not be the biggest fan of rapid delivery services, he’s recognized the importance of offering a wide variety of delivery slots, ranging from a few hours to a few days. In addition to increasing the speed of delivery, Ocado’s innovations will focus on improved maintenance, cost reduction, and one of our most basic cognitive biases: the sunk cost fallacy. During this insight, we’ll discuss Ocado’s six technology announcements in detail and analyze the implications.

Ocado’s first three technology announcements focus on improving the efficiency and reliability of automation used within its fulfillment centers. The 600 Series Robots reduce the operating costs of the system and are also an enabler for the technology to be used in more brownfield sites, potentially closer to the customer, as the Hive structure can be significantly lighter. The ‘On-grid Robotic Pick’ and automated frame load reduce the labor required throughout the fulfillment operation. Picking is notoriously one of the most labor intensive roles within a fulfillment center and loading delivery frames is one of the most physically demanding roles. According to Tim Steiner, these technologies have the potential to reduce labor spend by 30% in the short-term and 40% in the long-term.

In comparison to the boxy 500 Series bot, the radically reimagined 600 Series bot looks like something out of a science fiction film. The key takeaways are the lightweight frame developed by 3D printed parts using topological optimization. This allows for the parts to completely redesigned, removing any excess material, and only keeping the elements of the parts that provide structural integrity. The result is a highly porous looking bot with holes and openings across the entire structure meaning you can see the retrieval process of the totes as they move into the cavity of the machine.

Being 3D printed and topologically optimized has allowed Ocado to significantly reduce the weight and maintenance costs of the robots. Tim Steiner claimed the robots were 5x lighter than the 500 Series, requiring smaller batteries and motors and causing less friction against the grid meaning the site doesn’t have to be cooled as much. Whilst interesting in and of itself, it’s what these light-weight robots enable that caught our attention. The lighter, more energy efficient bots allow for a lighter, more simple grid structure which enables the technology to be built in brownfield sites, rather than purely greenfield locations.

This has significant implications for the development of smaller facilities located closer to the customer where greenfield sites are harder to come across. Furthermore, we estimate that the robots account for approximately 25% of the overall value of warehouse automation system which means that a cost reduction in the robots leads to a meaningful impact on the overall economics of the solution.

In addition to the lighter, more energy efficient 600 Series bots, Ocado also announced the On-grid Robotic Pick. Coupled with the ability to store customer orders within the Hive, the On-Grid Robotic pick has the potential to significantly reduce the labor spent picking and packing the order as these functions occur alongside the retrieval bots (see image below). In 2020, Ocado acquired Kindred Systems and Haddington Dynamics for $300m. Using machine learning algorithms and supervised autonomy developed by Kindred Systems, alongside the low-cost robotic arms developed by Haddington Dynamics, the On-Grid Robotic Pick will supposedly be able to handle more than 80% of the products in the Hive. 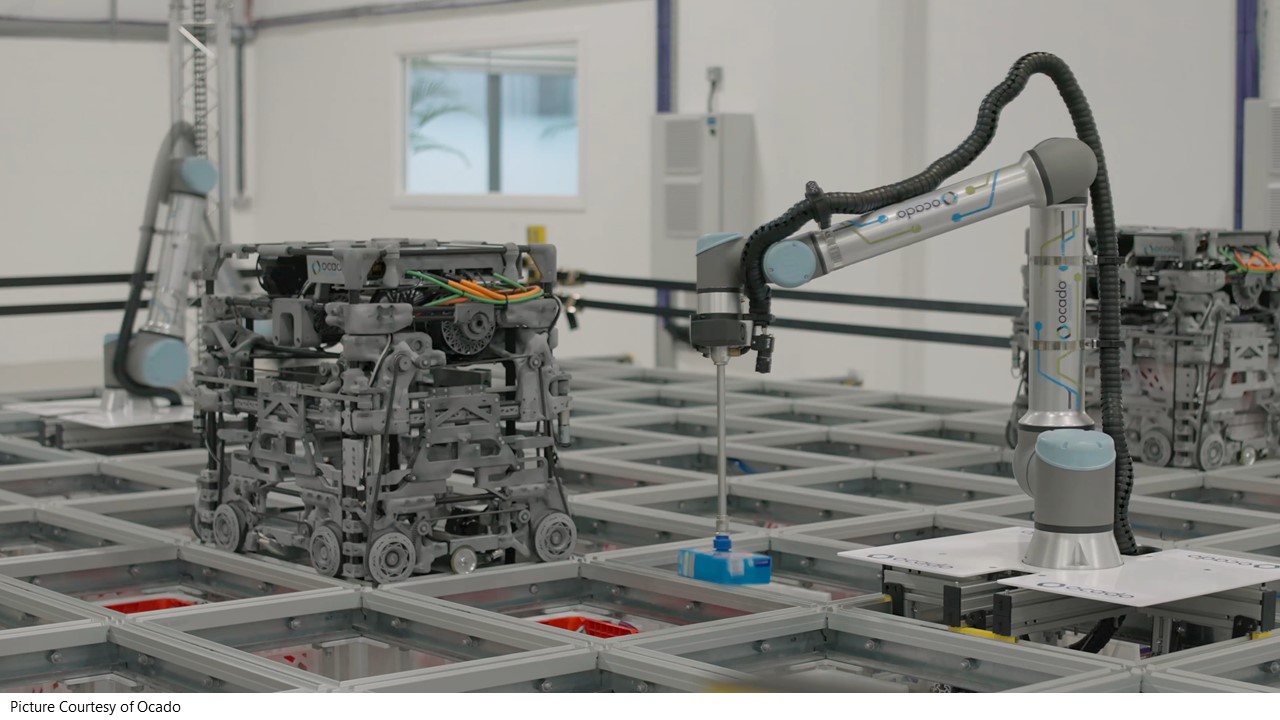 The automated fame load solution sequences and loads the delivery totes into delivery frames which are subsequently transferred into vans for delivery. According to Tim Steiner, this process has historically been one of the most physically demanding jobs throughout the fulfillment process. Given the dynamic algorithms used to decide which delivery van takes which order (which can change at any second based on hundreds of different variables), automating the sequencing and loading of the totes into the correct frame (corresponding to a specific delivery route) reduces the risk of human error.

In addition to the improvements in its automation technology, Ocado also addressed its network design. In particular, Ocado addressed the growth of rapid delivery companies and the need for retailers to cater for all customer segments, including immediacy missions.

Ocado Swift is a solution which allows priority orders to be expedited when preparing a delivery van’s route. If an order is placed for immediate delivery, the order picking and packing is expedited and delivery routes are adjusted such that the rapid delivery orders are placed first, whilst the longer lead time orders are fulfilled in the latter part of the delivery route. Despite addressing the same-day segment, it seems unlikely to solve for the rapid delivery segment (< 2 hours) as the orders are still picked and packed from a centralized location.

One of the benefits of having a large CFC is that suppliers have a single location to deliver goods. However, as retailers look to build larger networks of smaller fulfillment centers closer to the customer, inbound logistics can become very inefficient if suppliers have to deliver to several separate locations. Traditionally, this problem would be solved by using a regional distribution center which replenishes the smaller fulfillment centers and acts as a single point of contact for the suppliers. 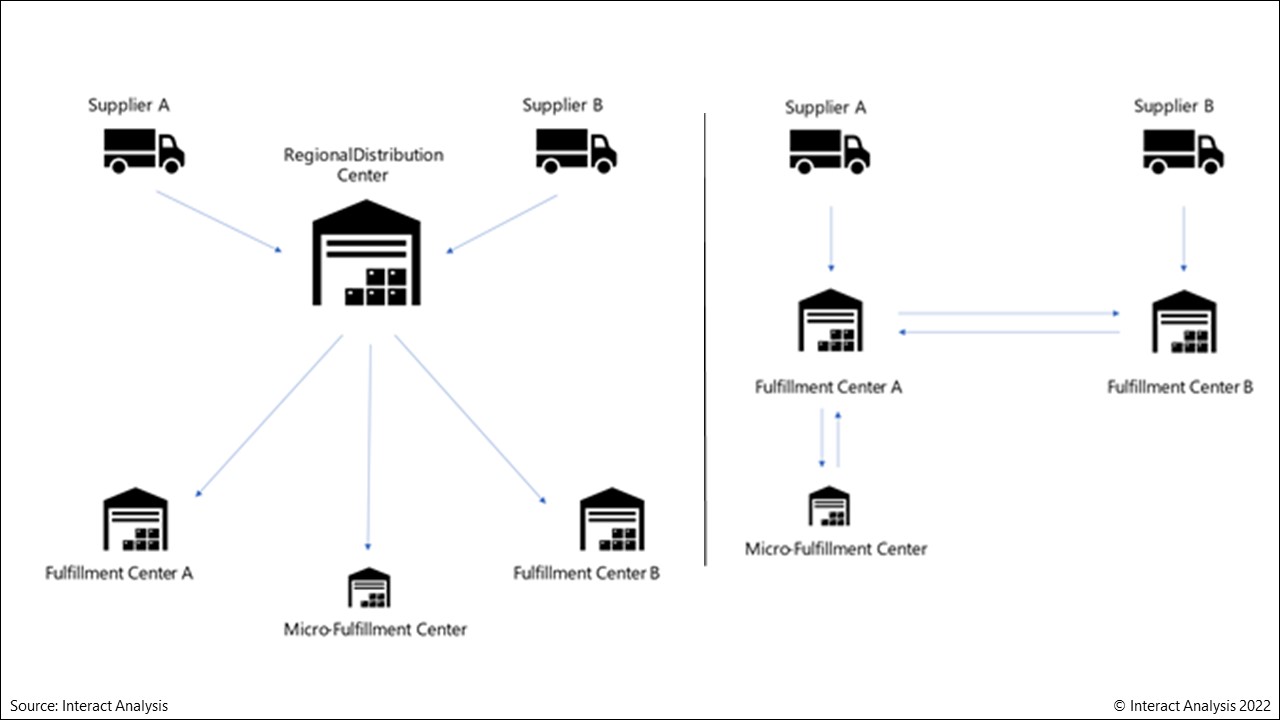 One of the more interesting benefits of the dynamic reallocation process is the replenishment of smaller fulfillment assets from a larger CFC. One of the biggest challenges which rapid delivery companies face is the replenishment process. Shipping cases to dark-stores is highly inefficient as the throughput is too low. As a result, many rapid delivery companies replenish their dark-stores with eaches, or at least are aiming too. However, this requires an additional step in the supply chain to ‘decant’ the items from cases into totes before shipping them to the dark-stores. Furthermore, receiving a tote of items in a manual dark-store leads to inefficiencies when restocking shelves.

The Ocado Orbit means that totes which have been ‘loaded’ upstream in a larger CFC can be shipped to an Ocado Zoom site and ‘slot’ directly into the automation without having the decant the items into the system. This is essentially how a vending machine works. You don’t replenish a vending machine with individual Snickers bars, you slot in a full cartridge of Snickers bars which were ‘pre-loaded’ upstream at scale. What’s more, the additional step in the supply chain used to decant cases into totes has the potential to generate revenue because it’s also fulfilling local customer orders as well as replenishing Ocado Zoom facilities.

The final solution announced was the Ocado Flex which is arguably the most significant, despite being glossed over fairly quickly during the launch. Ocado Flex allows retailers to integrate their existing front-end platforms and app solutions (either in-house or third-party) with the Ocado Smart Platform (OSP).

The sunk cost fallacy is the tendency to follow through on an endeavor if we have already invested time, effort, and money into it. Ocado’s main clients are large-scale grocers and there are very few grocers which haven’t developed some form of e-commerce platform, no matter how rudimentary they are. Ocado Flex means that retailers don’t have to write off historical investments in e-commerce platforms to leverage the benefits of the OSP.

Ever since Jefferies published its scathing note on Ocado on its ‘misstep when compared to micro-fulfillment’, analyst firms have been skeptical of Ocado’s CFC strategy. Whilst Ocado has since developed mini-CFCs and Ocado Zoom facilities, the core focus of its business has remained focused on centralizing fulfillment.

Today, Ocado announced a suite of technologies that allows Ocado to get smaller, move closer to the customer and provide shorter delivery times. Whilst this is certainly a good thing for Ocado, we’re starting to see signs in the market that Ocado’s bet on centralized fulfillment wasn’t a misstep after all. Firstly, the trials of automated micro-fulfillment centers are taking a lot longer than previously anticipated – in fact we’re seeing far fewer large-scale orders of automated micro-fulfillment centers than we had originally forecast 12 months ago. Furthermore, many of the large grocery retailers now outsource the fulfillment of unprofitable grocery orders with short lead times to companies like Instacart and its white label offerings, meaning the more profitable weekly-shop orders with long-lead times can be centralized in a CFC. Secondly, the sentiment from Kroger seems to be very positive with several new sites being announced since the initial go-live last year.

The biggest unknown is whether Ocado’s customers will see the cost-savings from the new technology in terms of lower fees, or whether the cost reductions will be used to boost Ocado’s margins. We understand that Ocado charges a fixed fee based on the installed fulfillment capacity. For a large CFC with the capacity to fulfil $300 million orders/year, this equates to a very large annual operational expense. If these new technologies are used to reduce current fees (for both new and existing customers), Ocado’s offering will become far more attractive.

However, with so many exclusivity rights, whereby Ocado can only partner with a single grocer in many of its international markets, the question is who can Ocado partner with next and in what country? Germany is one of the last major economies without Ocado’s presence and Rewe has developed its own platform, Edeka uses Picnic and its very unlikely Aldi or Lidl would partner with Ocado. Are these developments therefore aimed at strengthening its current partnerships through increased investments?

Despite all of the unanswered questions, it’s clear this announcement is big news for Ocado and for its competitors. It’s clearly listened to feedback and developed solutions to address its limitations. Overall, we would agree that technologies announced are indeed ‘game-changing’.

To continue the conversation get in touch with Rueben directly on: Rueben.Scriven@interactanalyis.com